The points awarded for the 1971 season were as follows:- 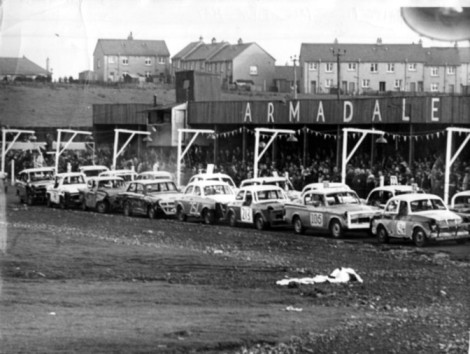 The big news for 1971 was the opening of the Armadale Raceway in West Lothian on the 28th May. The asphalt track was reputedly modelled on the shape and size of Wimbledon, as most major Spedeworth championships were held at that venue, this would enable Scottish drivers to get more practise on a traditional oval, Cowdenbeath had of course a more square shape, far  more pronounced than it is today.

Interestingly it was no 9 John Duncker who won the opening Superstox heat, the opening F2 heat at Cowdenbeath in 1965 was also a no 9, Peter "Pepso" Dent.
The first Saloon Stock race at Armadale was won by Dave Nelson who went on to become the Armadale Saloon Stock expert in the early years.

Announced in the 09.05.71  programme that Hot Rod Racing was to be introduced on a weekly basis, with a race against English visitors proposed for later in the year.
6 English Hot Rods provided a demonstration at the British Superstox Championship on 4th July, including the already Hot Rod legends George Polley & Barry Lee, Polley, won both races with Lee taking runner up spot.

Les Kay having dominated the previous years Saloon Stocks, tried his hand in the Superstox for half a dozen meetings at the beginning of the season, won a heat, but little other success, however on the announcement that Hot Rods were to be introduced to Scotland, decided that going the wrong way round was not for him.

These early Hot Rod demonstration events had resulted in a few distinctly non Hot Rod type driving, indeed, Malcolm Watt & Les Kay clashed in the 1971 New Years meeting, to the extent that they both should have been dissqualified.


The honours for the 1971 season were as follows:- 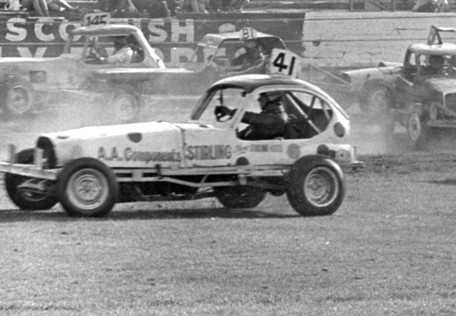 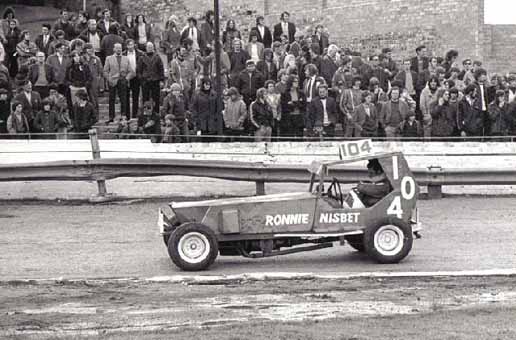 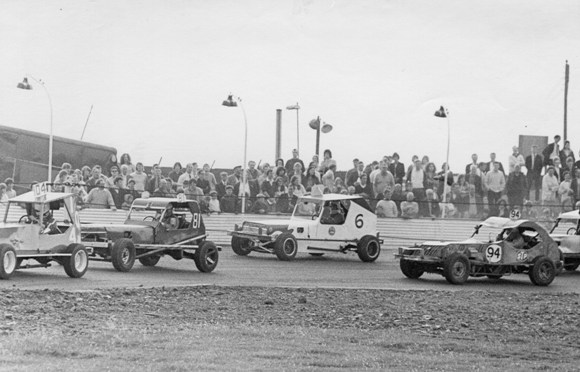 For these purposes the British, Open Scottish, UK Challenge Cup & "Cock of The North" (Final & Championship winners race) are counted as finals.

John Duncker's first season in Superstox was very successful, achieving 12 wins during the season, including a memorable final at Cowdenbeath when he crossed the line first despite being hooked up with Walter Brown for the last couple of laps!

1971 Open Scottish Superstox Championship, 41 Gordon McDougall unable to defend or even visit track to spectate due to still being in great pain, Gordon sufferred over the years from a medical condition which can induce severe pain. Ex Saloon Stocker Ronnie Nisbet winning the big race from Roy Eaton & Bil Pullar.

Scottish qualifiers for the European Superstox Championship at Ipswich in July were Ronnie Nisbet, Alan Neilson, Ronnie Anderson, Bob Morton, Andy Davidson, John Duncker & Gordon McDougall. There was no success in the top 6 though, Bob Perry won from Dave Pierce & Tony May.
Gordon McDougall did achieve a heat 2nd and final 8th and Malcolm Paterson a heat 5th in the other races.

Controversy in the 1971 Scottish Superstox Championship, which principally surrounded the 2nd & 3rd positions, the result was eventually confirmed as 1st Malcolm Paterson, 2nd Alan Neilson, 3rd Walter Brown.
The uproar which occurred at the meeting, was commented on in the following Armadale programme on 03.09.71, Gwen Cecil went on to praise the lap scores & how great a job they did. The Cowdenbeath programme of 05.09.71 had even more emphasis on how great a job the lap scorers did, & how difficult the job was. There was also an unprecedented description of the race itself & where the drivers respective places were on each lap, also highlighting the incident where Walter Brown lost his lap. Gwen's final sum up in the programme was "Unlike you all, I have no favourite driver, so I see and act impartially, but I would like to put on record that I have the upmost confidence in the three lap scorers, WHO HAVE BEEN TRAINED BY ME".
It should be noted that Gwen was one of the main lap scorers with the English Spedeworth organisation when they started and was by all accounts one of the best.

Ronnie Nisbet had developed as the Armadale specialist. As well as the West Of Scotland win, he collected 23 race wins there and was the track points champion. He was still only 20 years old. 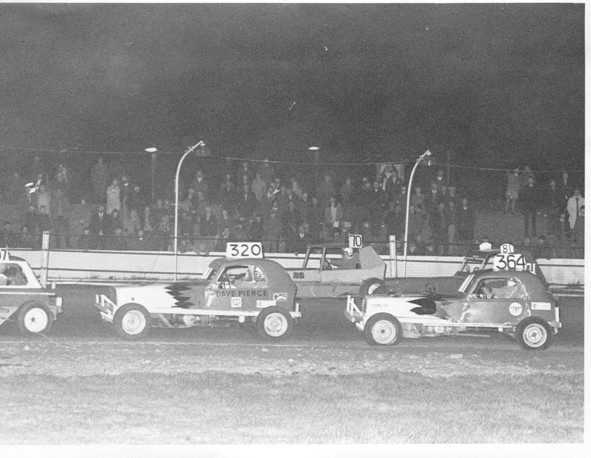 At the Friday night meeting on the 24th September at Armadale (pre Sunday's UK Challenge Cup at Cowdenbeath) Tony May put up a thoroughly dominating display taking both of his participating heats and the Final. 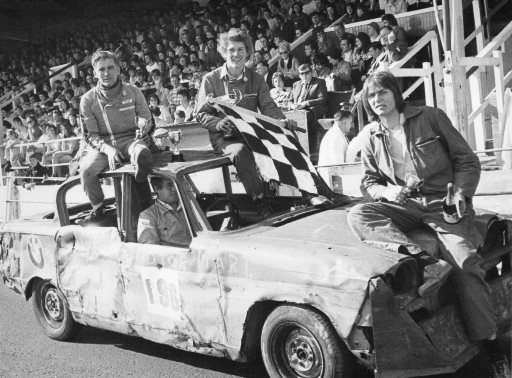 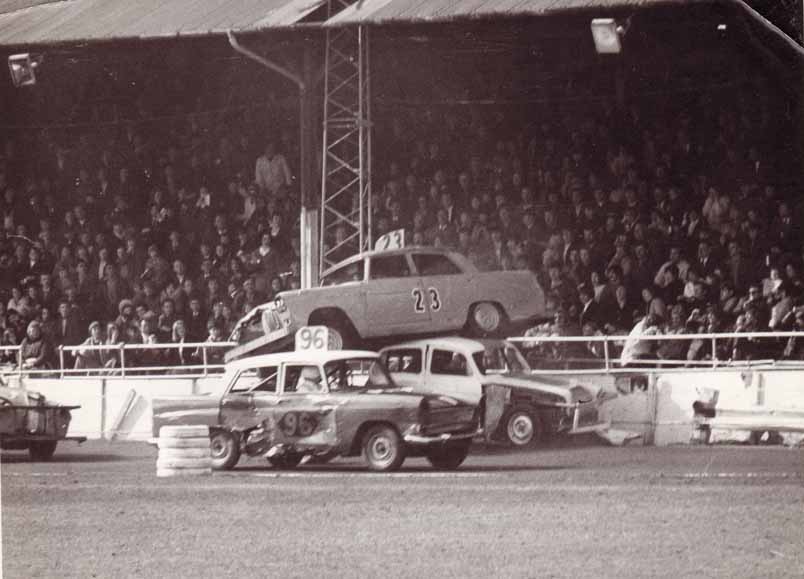 No 23 Dougie Farrer executing the balancing act, I don't think No 96 Matt Campbell can believe it either! (photo knockhillimages.smugmug.com) 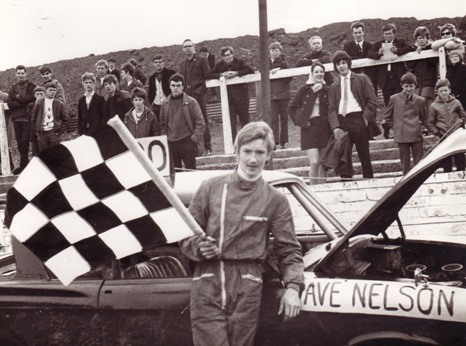 Drivers with the most highest scoring meetings as follows:-

Both Dave Nelson & Hamish Buchanan scored a meeting maximum each, during the season, winning all paticipating heats & final.

Johnny Davidson after finishing 7th in the British Championship at Wimbledon, travelled over night from London to clinch the Scottish Points title at Cowdenbeath - a supreme effort. England's Chris Gautrey won the event.

54 Saloon Stocks appeared at the Scottish Championship meeting at Cowdenbeath on 05.09.71, amazingly an additional 16 different cars raced at the following Armadale meeting on 10.09.71 .
A Demonstration that the opening of an additional track will attract new local drivers to the sport, -provided of course it is in a different area.

Dougie Farrer was 60 points in front of his rivals when he received a suspension for having an illegal car. A modification which was later allowed on all cars. Brother Tam took the car over, reaching blue grade and winning 4 races before Dougie claimed it back.


Johnny Davidson had now built up a 50 point lead over Dougie. Johnny went on to win the points title, but it was still only clinched on the last points scoring meeting of the season, 345 points to 341.

After setting such a cracking pace in his debut season Kenny Ireland started a bit slower this year, indeed dropping to blue, however he then went on a winning streak of 5 out of 6 races, only to then get himself suspended, dropping to 8th in the points. He showed that the forced lay off would not result in a drop in form when he spun at the start of his first race back, recovered, then  went on to win it. Of course his Scottish Championship win was the highlight of his year.