The points awarded for 1975 season as follows:-

The Saloon Stocks averages were much the same as 1974, down one at 25. Unfortunately the Superstox were down again down four to 16 & the Hot Rods down again, this time by 3 to 7 cars.
The highest total for the Saloon Stocks of 33 cars was at the last meeting of the season the "Cock O the North" meeting, always well attended. The best attended Superstox was the "UK Challenge Cup" on the 10th August at 22 cars & for the Hot Rods the "Open Scottish" on the 24th August at 13 cars.

Spedeworth Scotland's first banger races took place on 18.05.75.  20 cars started the first race with Superstox driver 49 Eric Moore having the honour of being the first winner. A demolition derby rounded off the meeting with Janet Ireland (wife of Kenny) the winner.

The bangers were originally due to commence at Armadale Raceway on the 2nd May, where they had been scheduled along with the Superstox. In the end this did not happen & in fact Armadale did not re-open for a number of years. 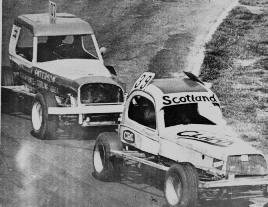 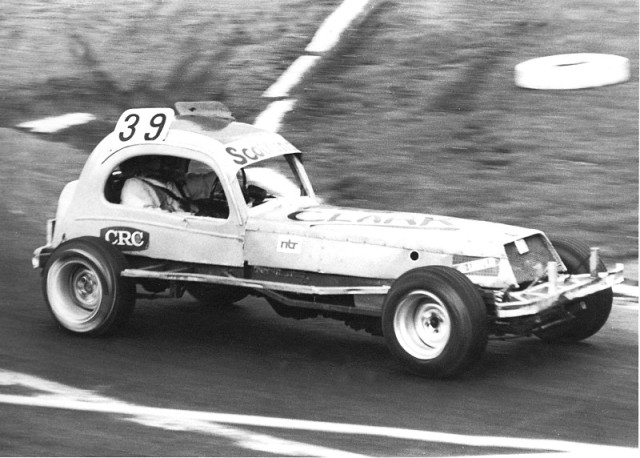 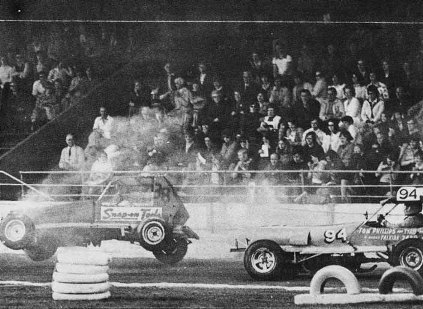 Malcolm Paterson retired on 8th of June 1975, he had already 5 finals under his belt this season.
His name was removed from the 6th points chart, but the points gained were enough for him to finish in 8th position in the end of season totals.
Malcolm is a major candidate for Scotland's greatest ever Stock Car Driver, his first major win was the UK Challenge Cup back in 1966, and his career incorporated 94 final wins and 212 heat wins, his biggest win was the European but he also won the British, Scottish, East of Scotland three times, West of Scotland twice, Open Scottish & UK Challenge Cup four times.
Malcolm commenced racing in 1966, made 6th place in the points in 1967, and won the points in 6 out of the following 7 years, in the year he didn't win, 1970, he finished 2nd.

It was rumoured in 1982 that Malcolm was to make a comeback, and indeed he did have quite a few races in Gordon McDougall's F2 collecting a number of wins as a white top, in fact was leading the Scottish F2 Championship in a star studded field by the proverbial mile until forced out with mechanical gremlins. Unfortunately the bug didn't take hold again. Trajically Malcolm died in 1990.
Malcolm's son Steven Paterson did take up F2 Stock Cars & had a very successful career winning the Scottish Points Championship.
More of that to come later.

COCK of the NORTH - 26th OCTOBER

Johnny Davidson 118 returned after a two year away sabbatical from the Saloon Stocks to win the East of Scotland on the 7th September. 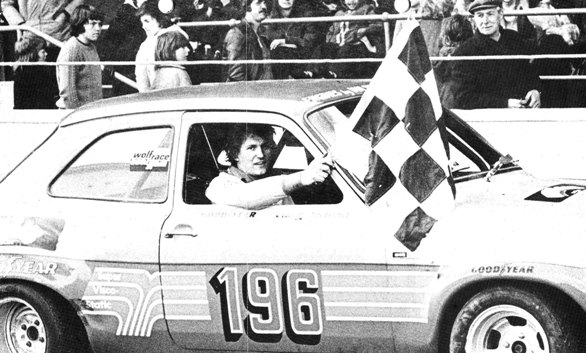 The stats for the most wins in 1975 were as follows:

This was definitely not a classic year for Hot Rods. Two contestants for the "Cock O The North" race seemed to exemplify this. Kenny Ireland secured a comfortable points win. Graham Wait signalled he would be a force to be reckoned with capturing the Scottish & East Of Scotland titles. Graham's driving style is best described as wild!, he was always taking the greatest of risks with the greatest commitment, his little Hillman Imp rocket ship spent more time on 2 and 3 wheels rather than 4.
Les Kay didn't see out the season but finished in runner up spot in the points & also captured the prestigious Open Scottish Championship.

A You Tube video of the 1975 Hot Rod World Championship can be viewed here.